I opened up my local newspaper this morning and read the following quote from Billy Collins.  It pretty much sums up so much of what I find annoying and disheartening about the contemporary poetry scene in this country.  Collins was being interviewed in connection with a poetry slam called the Literary Death Match which has been organized  by a local university, and for which Collins has been appointed as the judge of "super-intangible merit."

"There are some people that are critical about the Literary Death Match or slam poetry, because they don't think poetry should be competitive.  That's a common argument against it.  And not that I'm a proponent of either of these exercises, but of course it's competitive.  All literary effort is competitive, in that, if you send a poem to a magazine, you're competing with all the other poems that have been sent to the magazine at that time.  Same with submitting a book to a publisher.  You're competing with the other manuscripts."

Billy Collins, as quoted in the Southampton Press

This gem of wisdom comes from our two time Poet Laureate.  Sitting atop of the status hierarchy, not that he's a proponent of such things but he is the judge presiding over the assessment of super-intangible merit in this upcoming slam.  It's quite remarkable to me that the spirit of poetry in this country has been so corrupted by the virus of our broader culture that one of our most acclaimed poets sees competition as inherent to the very submission and publication process.  It's the war of each against each, reenacted in blank verse.   Competitiveness being the highest ideal of our neoliberal order, its serves as the organizing principle for economy, society and culture.

This is a view of poetry that is truly worthy of a modern day Tibbald.  It's also a large part of the reason why I have decided to self-publish my poems here on my blog instead of acceding to the further debasement of what makes reading and writing poetry worthwhile, as I see it.

For those of you who are interested in poetry animated by a less competitive spirit, I'd like to close this morning's tirade with my translation of a poem by Han Shan - the hermit of Cold Mountain.

A good friend of mine has pointed out to me the irony of this blog post -- here I am criticizing another poet and offering up my competitive version of what poetry is supposed to be. So perhaps our Poet Laureate is right after all in his assessment, proven by nothing so much as my own competitive instincts.  But setting such irony aside, I think there's an important difference.  The point of poetry, as I see it, is self-directed and greater self-awareness is the ultimate reward.  This is equally true of reading, writing and translating poetry, all of which provide a way to still the clamoring heart, as opposed to producing still more clamor and competitive din.

We can carry a good metaphor in our heart wherever we go.  And then, as Han Shan explains it, when we awake from our dream of wandering, there is still a golden ladle right there in the crook of the tree, waiting for us to serve up more truth still. 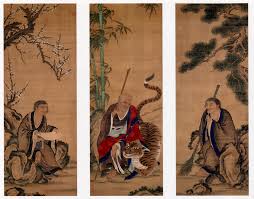 Posted by JoeLampoet at 8:10 AM