To Step Without Feet: My Dream About Dying

I sleep to wake inside a bardic glow
A fretful state, this fear of letting go
To lose my self in what I cannot know

Last night I had a dream about dying. I've had a version of this dream many times before but never managed see it through to the moment of my actual demise.

In the past, whenever I've had this dream, it had always been my habit to wake up a moment or two before the trigger gets pulled or the car I'm riding in veers off the side of a cliff. But last night, when the firing squad cocked their rifles and the Generalissimo gave the order, I found the wherewithal to stare down the fusillade and die my dream death.

I suppose this is another way in which our dream life corresponds with our waking life because it takes a certain amount of courage to see a difficult situation through to completion.

Dream death as I experienced it last night can be compared to a core dump in which your nervous system lets go of whatever it is holding in storage.  This is consistent with the way death has been described in literature, such as the great story by Ambrose Bierce, An Occurrence at Owl Creek Bridge, where the protagonist sees his entire life flash before his eyes the moment he is hanged.   In last night's dream my life story was presented textually - as a series of flashcards that were revealed to me in quick succession.  It was like reading the chapter headings for the key events in my life. Learning to swim. First taste of falafel. Birth of a child. These cards were displayed with increasing rapidity until they became an unreadable blur, just the way a core dump scrolls by on the computer screen. Then my body convulsed a few times and the energy discharge gradually subsided. It was not the least bit unpleasant.  In fact, it felt exhilarating.

I awoke this morning completely refreshed and quite alive, ready to start over again with the memory stacks cleared and all synapses firing.

I had a chance to speak about this dream briefly with Dr. T, my friend and spiritual advisor, who also happens to be a psychotherapist.  The good Doctor was pressed for time and unable to delve deeply into dream interpretation but he did share with me the following poem by Rumi:

This is love: to fly toward a secret sky,
to cause a hundred veils to fall each moment.
First to let go of life.  Finally to take a step without feet.


Posted by JoeLampoet at 6:44 AM No comments: 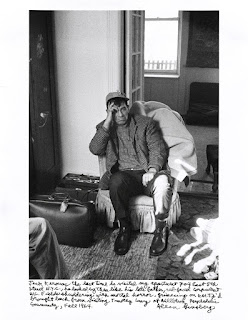 Posted by JoeLampoet at 2:57 PM No comments:

Poetry - Plain Spoken or Not

Matthew Zapruder (a poet I admire very much) has written a good piece in the New York Times about the central importance of the literal or plain spoken-ness when it comes to poetry.  This seems so obvious to me as to not require much discussion, but such is the state of modern poetry, in the hands of its academic minders, that it must be rescued from the clutches of over-artfulness and obscurantism.  As with most other types of writing, there is no better place for a poet to start than with the willingness to speak clearly and directly.  Thank you Matthew for reminding us that poetic truth can and should be plain spoken whenever possible.

For me, though, there’s an important corollary to Zapruder’s first principle.  Just as a poet must embrace the value and importance of literal truth, a poet should also recognize that words alone are limited in their power and capacity to convey some of life’s deepest and most important meanings.  That is to say, spiritual truth very often leads us swiftly into the realm of the ineffable – a place where silence more than poetry holds sway.   If nothing else this corollary should impose a little restraint on every poet’s worst tendency, which is to fall in love with the sonorous possibilities of one’s own voice.

*  *  *  *  *
I have more to say about this.  But as someone who has come to believe very much in the sanctity of Emptiness and Nothing, I’ll try to keep my commentary brief.  That’s precisely why I’ve decided to call my new book (still a work in progress) The Little Book of Nothing.

You can sign up below to subscribe to my email newsletter where I will be publishing excerpts from this work as it takes shape.  The section I’ll be publishing is called The World in Translation and, among other things, it includes an introduction to Tang Poetry and an explanation of why Chinese poetics provide such a powerful “new” approach for us to think about life, language and art, an invaluable alternative to the way we in the west usually think about these things.