One way to understand translation is that it's the opposite of writing or its mirror image. When you write, you start with a truth that’s inside you, and you use language to try and expose it to the outside world. When you translate, you start with an outside truth that’s given to you, and you must internalize it through the medium of language. Translation in that way is just a deeper form of reading, an attempt to go beyond a shallow understanding of what someone else has said by memorializing it in words that ring true to your own ear.

Red Pine, who is one of my favorite translators of Chinese poetry, has said that there are as many translations of a Chinese poem as there are translators. That's really a definitional observation and leads us to the understanding that there is no such thing as a definitive translation.  To take this thought a bit further, translation is certainly not a science, nor do I think of it as an art so much as it is a fundamental part of the human condition. We are forever translating, whether we realize it or not, the web of language that surrounds us into our personal idiom.

We pursue truth the way a hunter chases after game, except that truth is far more elusive than even the fleetest doe or buck.  No matter how many arrows we shoot, they always fall short of the mark, until we learn to shoot in the dark and with no arrows at all take aim.  Writing and translating happen through the medium of language but the truths we pursue reside in wordless silence and ultimately that’s where they always remain. 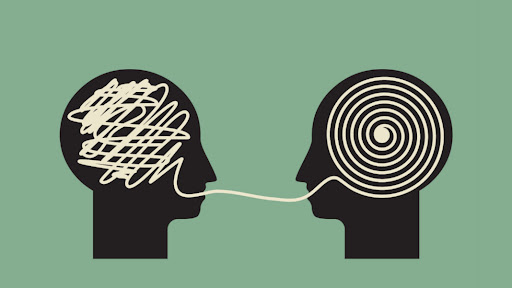 My new book of translations of Chinese poetry

called The Poetry of Awakening is now available

in paperback.  You can find it on Amazon (if you

"There's something wrong here. Translating Chinese poetry isn't supposed to be this much fun"

When I finished the manuscript for this book, I sent a copy to Red Pine and he was kind enough to provide me with this blurb quote.  My editor, Marc Estrin, decided not use it on the book jacket because he thought it didn't recommend or illuminate the book to potential readers.  This is one case in which I find myself disagreeing with Marc.  Red Pine's blurb reads to me as high praise, at least when I translate it into my personal idiom.  Translating these poems was close to pure delight for me, and I hope at least part of that joy comes through for readers.

Posted by JoeLampoet at 5:45 AM No comments:

I Hear the Spinning Earth (for @duanetoops)

Waking from a dream last night
I heard the earth's gears turning
And ringing in my ears or maybe
It was a high pitched sonic wind
Blowing steady through the trees
Pfizer and Merck might try
To medicalize this condition
But to hear the earth
Spinning no fearful thing
It's a dizziness to be savored
Like a theremin on a planetary
Scale the world hums as it spins
Posted by JoeLampoet at 6:24 AM No comments:

The Poetry of Awakening 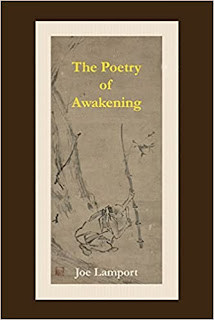 Every day the same routine, as Layman Pang put it, only with myself in harmony, not right or wrong but abiding.  Today's routine is only different for me because it's the publication date for my new book, The Poetry of Awakening, an anthology of Tang spiritual poetry, The collection includes translations of 78 poems by more than a dozen Daoist and Buddhist poets, illuminating this unique tradition in which poetry merges with spiritual practice.  Layman Pang's poem about his daily routine served as the inspiration for me over the last half dozen years, as I plugged away reading and translating these wonderful poems.

I'm deeply grateful to Marc Estrin and Donna Bister of Fomite Press for their patience, encouragement and invaluable help, without which I would most likely never have seen this project through to completion, and most certainly never would have been able to produce such a handsome book.  This is the first time I have had the chance to work with a publisher in producing one of my books, and despite all my  misgivings about losing control over the process, there's no doubt it pays to have the very best professional help.

Some but not all of these translations have already been published here on my blog.  But in case you're interested in having a copy to carry along on your next mountain trek or meditation retreat, you can buy it now on Amazon (if you don't mind abetting monopoly power), or pre-order it from Barnes & Noble.

Here's an excerpt from the preface that explains a bit about what I find so compelling about this poetic tradition:

The poems I've chosen to translate and bring together in this collection were written in China during the first millennium of the Common Era.  They include poems by a diverse group of writers, many of them Buddhists of one stripe or another, others Daoists or fellow travelers of the Buddhist faith.  But even among those who identified as practicing Buddhists, it may be misleading to suppose much commonality of faith: Buddhist spiritual beliefs and practices in China evolved considerably over the course of the centuries in which these poems were written.  Some of the poets collected here were renowned and avowedly secular, while others lived as reclusive hermits, and still others took up orders and lived as members of a monastic community.

Diverse as this grouping of poets may be, and divergent as their life experiences and doctrinal beliefs were, the poems here represent a singular and quite remarkable poetic tradition, which I refer to as the poetry of awakening. The common aspiration was to express through poetry the nature of spiritual awakening, as they experienced it in their own lives.  These are personal poems, deeply felt, which makes them accessible, even thought they speak to us from a distant time and strange culture, and address the loftiest and most abstruse of themes.

At bottom, this tradition rests on an unresolvable paradox.  The assumption (often explicitly stated) of these poets is that the experience of spiritual awakening is incapable of being expressed in words, no matter how artfully a poem may be crafted.  The insights possessed by the awakened mind and heart simply fall beyond the capacity of language.  Why write such poetry at all, then?  Part of the wonder of this tradition is the continued striving to give voice to the inexpressible. The tension wrapped up in this paradox confers to the poems' spiritual depth and power.

Something else I find distinctive about this mode of living and writing is the fusion of poetry and spirituality into part of an integrated practice.  At their best, these poems are not simply exercises of poetic imagination, nor are they merely descriptive of the poet's spiritual life.  They seem directly integrated into the process of spiritual exploration and experience.  Poetry becomes the practice.

Posted by JoeLampoet at 11:47 AM No comments:

With a named storm

The whole lawn is trembling

In response to the stiff breeze

Its the affinity between

The same wind that

Into a new form

Posted by JoeLampoet at 4:00 PM No comments:

Poem for a Cloud Passing Overhead Near the End of Summer

Falling deeper into reverie
I get a glimpse of it yet
A summer breeze stirs
Across the lawn
Recursively
Just as vision returns and
A cloud whispers overhead
Poems within poems
In the things
A great poet never said
Human nature is the container
Our experience flows
Into continuously
All the signals received
That were never sent
The ghost in the machine
That keeps us busy guessing at
Whatever might have been meant
Posted by JoeLampoet at 8:05 AM No comments:

After the First Death

What makes you so sure
That after the first death
There can be no other
After the first one
Deaths merely become
Numberless
Each day brings
Its own variety and
Occasionally they come
Under a borrowed name
(such as awakening
or something equally
difficult to explain)
Which means that over
The vast span of eternity
No two of your deaths
Will ever be the same
Posted by JoeLampoet at 12:45 PM No comments:

I Slowed for Death

Posted by JoeLampoet at 8:53 AM No comments: