This is part two of an essay inspired by rereading Walden Pond in celebration of the bicentennial of Thoreau's birth.  The gist of my argument is that Thoreau has much to teach us about the successful integration of the spiritual traditions of East and West. Although his first hand exposure to Buddhism may have been quite limited, Thoreau's own thinking and writing evidence a very deep Bodhisattva awareness, almost as if he had independently and spontaneously arrived at the Noble Truths through his direct contemplation of nature. In that way, Thoreau still serves as a model for us today, showing us how to cultivate our Buddha awareness within the framework of our familiar western ways of thinking, pointing us down the path where we can discover our very own home grown dharma.

Yet there is a serious problem with viewing Thoreau in this light. Reading Walden Pond you will not find a single mention of the Buddha. There are a few passing references to Shiva, the Vedas and sanskrit but Buddha himself appears nowhere in Thoreau's contemplation about nature, which admittedly makes it a bit harder to make a case for him as one of the first great Bodhisattvas of North America.

Rick Fields (the brilliant historian of dharma in America) has suggested that the New England Transcendentalists may have been a little confused about the finer points of distinction between Hinduism and Buddhism, which is readily understandable given the paucity of Eastern texts that had been translated into English at such at early point in the 19th century.

But in fact, no matter how limited Thoreau's formal dharma training may have been, he appears to have been preternaturally gifted in his capacity for spiritual insight and growth. Where the Sixth Patriarch was brought to awakening simply by overhearing the Heart Sutra chanted in the street outside his window, it doesn't seem to have taken much more than that to bring awakening to Thoreau. He read a chapter or two of the Lotus Sutra in translation.  It made enough impression on him that he helped publish part of it for the first time in North America in 1845. For the most part, though, Thoreau seems to have figured out the rest of the dharma by himself, through development of a self-styled Yankee practice of his own, as described in copious detail in the pages of Walden Pond.  As Thoreau himself put it: "The Vedas and their Agamas are not nearly so ancient as serene contemplation."

Dipping into Walden Pond it doesn't take long to notice the Buddhistic qualities of Thoreau's ways of thinking and living. Quite striking from the outset is his presentism and mindfulness. In no uncertain terms he proclaims himself dedicated to the here and now, no less so than Baba Ram Das, or any Zen monk sitting in zazen for that matter. For Thoreau, the depth of his attachment to the present also means he trusts more in the truth of his lived experience than in the wisdom received from books, no matter how ancient their origin. In that sense, he seems even more Zen like, priviledging the insights derived from his quiet contemplation over those found in the sutras.

It's also not hard to see how Thoreau's recipe for living is something of a 19th century American variant of Buddhism's Middle Way. It is a path of compromise between extreme asceticism and extreme indulgence, a path dedicated to simplification and relishing the mundane pleasures of daily life. In Thoreau's case it is a Middle Way between the wilderness and civilization, a modest shack on the outskirts of town, close enough to town for regular visiting but remote enough to preserve the tranquility and space for quiet contemplation.

"I went to the woods because I wished to live deliberately, to front only the essential facts of life, and see if I could not learn what it had to teach," as Thoreau summed up his statement of purpose.  "(N)or did I wish to practice resignation, unless it was quite necessary. I wanted to live deep and suck out all the marrow of life, to live so sturdily and Spartan-like as to put to rout all that was not life ...."

To live more deliberately. What better way could there be to sum up Thoreau's practice of bringing a focused awareness to the daily routines of living.  This is surely a far cry from a meditation based practice of sitting cross legged and concentrating on the breath. Thoreau also meditates but in the manner of a Romantic poet, traipsing across the countryside and paddling after the loon on the Pond, letting loose of himself in the natural world.  But his spiritual practice is really not confined to occasional meditation. His practice is fully expressed in the way he goes about daily life. It is inherent in the meticulous way he builds his cabin by hand, plastering (after digging up his own lime) and stone masonry, keeping track of every penny spent in the process of doing so, and providing a detailed written account.  It partakes of the way he plants his bean rows and sounds the depths of Walden Pond. This hyper self-reliance and awareness of the natural world are the essence of Thoreau's method of spiritual cultivation.  In one beautiful passage he describes it as a matter of bringing the parlor as close to the kitchen and workshop as possible, when it comes to building an appropriate habitation for the human spirit. In other words, Thoreau's practice through living deliberately calls for stripping away all the trappings and indirection of civilization so man or woman may assume full and direct responsibility for his or her own material and spiritual well-being. An adz and an awl have taken the place of a begging bowl.

If nothing else, this underscores just how different Thoreau's notion of practice is from what we encounter in the teachings of the dharma masters.  Thoreau strives for an intensification of self-awareness and heightened mastery over his immediate environment instead of a letting go. The Self is his pathway as opposed to an illusion he seeks to overcome. And yet what's most remarkable is that the ultimate goal of Thoreau's is so strikingly similar to that of any great dharma master. "Not till we are lost, in other words," as Thoreau explains it, "not till we have lost the world, do we begin to find ourselves, and realize where we are and the infinite extent of our relations."

Whether we proceed through the Self, or over or around it, Indra's Net is waiting to catch us and hold us in its thrall.  Different as Thoreau's notion of practice may be, his home grown dharma begins to sound very much like what you would expect to hear from a Bodhisattva after all.

This is all I have time for right now. Hard to believe that our month in Nova Scotia is coming to a close and it is almost time to turn my attention back to life beyond the meadow. With any luck I will get around to writing the third and likely final part of this essay next week once we settle back into our Long Island routine.
Posted by JoeLampoet at 8:38 AM No comments:

The sea is no more than sound this morning, advancing or retreating, I have no idea, as the fog holds sway from just off the shoreline to a horizon unseen, all despite the sun's deeply discounted glare.

From the interplay of what is seen and inferred, obscurity gives way to occasional clarity, through the compounding mix of fire water and air. 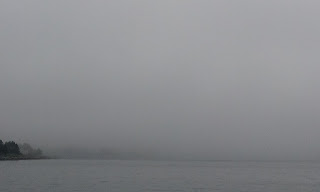 Tide, wind and fog are the controlling elements of life in Nova Scotia.  Tide becomes the major player along the upper reaches of the Bay of Fundy, while wind and fog prevail over most of the rest of the coastline.  The fog may be paramount in its influence both in what it conceals and reveals.  Elizabeth Bishop who was native to these parts described it this way: