How like a jumbling tower
Built from the most
Ordinary of expressions
It may reach extraordinary heights
Simply by following a natural order
As with birth and death
Both rhyming and
Sequenced
Posted by JoeLampoet at 2:57 PM No comments:

I wonder which is better, version 1 or version 2?


Another poem
Another wisp of smoke
A fragrant cloud
That wafts from
The bedroom window
Out across the hedgerows
With many millions
Of cilia I begin
To believe
In the inherent
Beauty of utterance
All over again
Like a jumbling tower
Built from the most
Ordinary of expressions
But following a natural order
As with birth and death
Both rhyming and
Sequenced
Posted by JoeLampoet at 2:38 PM No comments:

Another poem
Another wisp of smoke
A fragrant cloud
That wafts from
The bedroom window
Out across the hedgerows
With many millions
Of cilia I begin
Believing
In the inherent
Beauty of utterance
All over again
Posted by JoeLampoet at 11:09 AM No comments:

A Poem for Frank O'Hara

This is a poem I wrote after reading the Lunch Poems for the first time.

A few thoughts about Enlightenment are coming into better focus for me this fall.  Maybe it’s not a mental state after all.  I mean maybe it really starts as a physical condition.  And that’s why so many religious disciplines cultivate a wide variety of physical regimens to help open the Path to novitiates and other seekers.

By understanding Enlightenment as more of a physical than mental state I don’t intend to denigrate it.  Far from it.  Only to suggest that it may be easier to attain in literal fashion -- as a physical lightening of the load we carry through life.  You can simulate this feeling by first carrying around a 20 pound weight in your backpack and then suddenly you remove it and right away you feel a surge of energy throughout your entire body frame.  It's like a jolt of oxygen enriched air in every breath you take.  (Achieving this same sensation without the benefit of 20 pound weights or oxygen mask, that's the challenge we all face.)  This too entails mastering detachment of a certain sort, a loosening of the normal physical bounds.

Posted by JoeLampoet at 10:05 AM No comments:

A Dream of Blue House Street

I'm trying to resume the more regular practice of translating Chinese poetry.  It's such a great way to start the day.  Clinical studies have proven that a stanza of lyrical truth provides more stimulation than a cup and a half of the strongest dark roast.

Today's translation is of a poem by the Tang poet Du Mu.

Dispatched from the Heart

Posted by JoeLampoet at 6:35 AM No comments:

A FedEx Package from JPMorgan Chase

It was a long summer but today I feel as if fall has finally arrived.  And with it my mood has lifted too.  Melancholy took root in my soul in June and then spread out in crabgrass-like fashion, growing with abandon all summer long; but suddenly it seems to have been stopped dead in its tracks, withered overnight, and in strange counter-cyclical fashion, I find myself invigorated this morning, welcoming autumn with a strong sense of promise -- the prospect of a fresh start in my front and back yard after all.

I want to take the occasion to announce the launch of 1000 new ships.  I am re-engaging with the world effectively immediately.  Take particular note that this blog is being rechristened as part of the effort.  Henceforth this blog -- which up until now primarily served as a dumping ground for all the poems I otherwise didn't know what to do with -- is being reshaped as an online journal, my day book in fact, where you will continue having the chance to read my most personal thoughts, although now recast in prose form.  It's all still at no cost to you, I should add.

The fact of the matter is that I'm not writing so much poetry these days.  The depression pretty much killed that off, at least for now.  If there's ever a change in the status of poetry and my soul, I promise you'll be one of the very first to know.

Just as I was in the midst of writing this post, the door buzzer rang.   It was the FedEx delivery man summoning me downstairs for a package.  So mid-sentence I lost my train of thought and went downstairs where I found waiting for me an envelope from JP Morgan Chase.  Now usually, I'm thrilled to receive a package and am all in favor of tearing them open right away, eager for the thrill and excitement.  It could be a million dollar check, after all, albeit not very likely.

But today was different.  I was so engrossed in what I was thinking about, I hurried back upstairs, set the unopened envelope down beside my computer, and immediately resumed writing.  That's how important it was for me to get the Lampoetry blog relaunched.  If you're curious to find out what's in the envelope (as I am now, quite frankly) you'll just have to come back for more Lampoetry tomorrow. 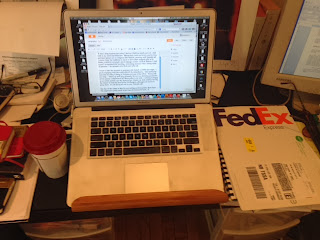 Posted by JoeLampoet at 9:56 AM No comments:

Posted by JoeLampoet at 2:18 PM No comments:

It’s 4 pm Thursday
On the first afternoon
Of the Jewish New Year
5774 to be exact
And the resolution I wish to make
Is to connect myself
To the ding an sich
Or noumena or whatever
You wish to call it
In a more direct way
No matter what
Immanuel Kant has
To say about it
From here on out
For the rest of my days
Posted by JoeLampoet at 12:59 PM No comments:

Poem Written While on Hold

Please hold for the next
Available operator
Visit Power Your Way
Dot Com for more
Information
Or else stay tuned for
The relaxing music
We have keyed up
To play for you next
Posted by JoeLampoet at 6:50 AM No comments:

For Gus the One-Eyed Cat