An Inscription on Buddha's Shadow (by Hui Yuan) - part 2

This is a continuation of a poem I began translating yesterday by the monk Hui Yuan in 4th century China.  It was composed originally as an inscription for a painting of the Buddha's shadow that Hui had commissioned to hang in a meditation cave near by his monastery.  (You can read the first part of my translation as well as a bit more background about the painting and the poem here.)

These verses strike me as a powerful endorsement for abstract art of all kinds - an explanation of how certain spiritual matters only become clear to us through an internal process rather than through explicit depiction or expression.  The fact that the poem was written in the 4th century about a painting of Buddha's shadow should not obscure us from appreciating its more general significance in terms of contemporary abstract art. 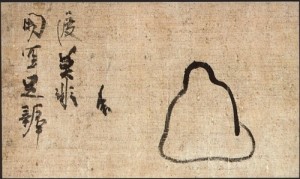 A little over 1600 years ago, the Buddhist monk Hui Yuan commissioned an artist to paint the image of Buddha's shadow on a silk scroll.  This may very well be the first recorded instance of abstract art.  Hui was inspired to have an artist undertake this work after hearing reports of a cave in northern Indian where Buddha's shadow could supposedly be seen flickering against the wall.  This poem is the first part of an inscription that Hui Yuan wrote when the painting of Buddha's shadow was hung on the wall of a cave on Mt. Lu, where he had established his own monastic community.