Poem for the Year of the Rooster

I was born in the Year of the Rooster and now I am heading into my sixtieth year.  Among the Tang poets this was generally considered to be a big deal - a real turning point in life,  You can read more about the significance of the Chinese view of the climacteric of the 60th year in a poem by the Immortal Bai Juyi that I previously translated by clicking here.  And if you prefer something in a more contemporary vein, here's a poem I wrote on my walk down to the Creek earlier this evening in celebration of the arrival of Chinese New Year.


Poem for the Year of the Rooster 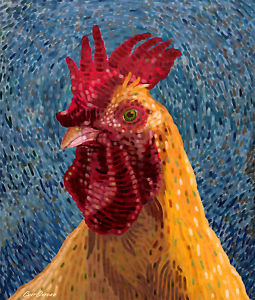 Posted by JoeLampoet at 3:24 PM No comments:

Backstory:  This short poem may be better appreciated with its backstory.  Today is Inauguration Day – a day many of us have been dreading, with an alternating sense of resignation and despair.  The indefatigable Kaveh Akbar (@KavehAkbar) made one of his fine poetic postings to Twitter – a lovely poem by Jorie Graham called Little Exercise.  It seems uncannily apt to the present moment.  The poem begins this way:

The screen is full of voices, all of them holding their tongues.
Certain things have to be “undergone,” yes.
To come to a greater state of consciousness, yes.

This is a powerful poem about our collapsing world order.  It’s not just a political or social collapse, as Graham goes on to acknowledge, the soil being so overfed it cannot hold a root system in place.  This feels like a crisis of Biblical proportion.  And so the poem ends hauntingly:

Are we “Beyond salvation”?  Will you not speak?
Such a large absence – shall I not compel the largest presence?
Can we not break the wall?