This is from a short series of poems by Zhang Jiu Ling.  The series is called Gan Yu - a phrase impossible to translate succinctly, it means something like feelings encountered along the way.  It is used as a title by Tang poets to indicate poems of a more contemplative nature.

Zhang Jiu Ling was a remarkable figure.  You can read a brief Wikipedia entry about him here which chronicles his adventures as a high ranking government official in the 8th century, maneuvering through a period full of palace intrigue in the years prior to the An Lushan rebellion.  As a high government minister he was apparently held in high regard for his plain spoken honesty.

I find the same quality animates his poems, particularly the Gan Yu series, which I believe may have been written in his later years, after he fell into political disfavor. 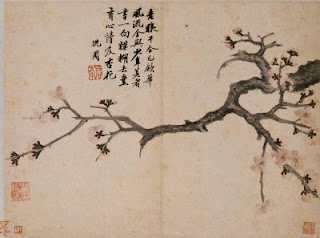 If you enjoyed this poem you can read the next poem in Zhang's Gan Yu series by clicking here.
Posted by JoeLampoet at 6:05 AM