Hitching up the Chariot of Fame

I find myself increasingly drawn to the poetry of T'ao Yuan-ming of the Six Dynasties period.  Known as the hermit poet, he writes with a wry and ironic sensibility about his withdrawal from society.  Despite his clear rejection of Confucian mores, he nonetheless acknowledges their deep impress on his spirit, and his poetry reflects his continuing attempt to define the poet's proper connection both to society and the natural world.  Even after resigning from government service, and retiring to his farmstead to write poetry, he seems to concede that he is pursuing a larger ambition and striving to distinguish himself in his own way.  Given that he lived from 365 to 427 AD, there's a remarkable humor and sophistication in the way he describes his motivations as a writer, as is evident in the following verse, which is part of a longer poem called A Tree in Blossom. 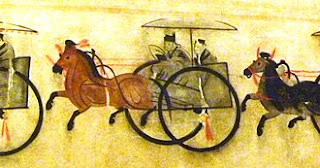 Part of what draws me to T'ao's poetry is his continuing ambivalence in his withdrawal from society and rejection of the prevailing Confucian orthodoxy.  He turns his back on the social conventions of his day and yet embraces them in his own independent way.

I'll be publishing my translation of the complete poem from which this verse is extracted in the next issue of the Tang Spirit Newsletter, so please click here sign up for your free subscription if you're interested in reading more.