With the Twelfth Moon Rising

What with the Anthropocene it's become that much harder for us to remember what it means to be well aligned with what used to be the normal course of seasonal change.  That's one of the reasons I love this series of poems by Li He written more than a millennium ago, back in the midst of the Holocene.  Li He wrote one poem for each full moon in the course of the year, each poem in the series precisely observing the changing habiliments of the earth and moon over the progress of our full transit around the sun.  This is the twelfth and final poem in the series, as we are just on the verge of preparing to celebrate the Chinese New Year.  The twelfth moon marks the pivot, as the poet observes in the final stanza - we are still firmly in winter's grip, although the daylight hours are already noticeably beginning to lengthen, and the Yang power has begun the long march to its ascendency.

Meager but unrelenting
The frost extends
Under the Cassia trees 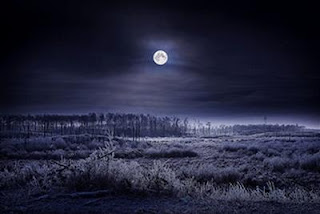