A Song from Cold Mountain - is it a koan or poem? 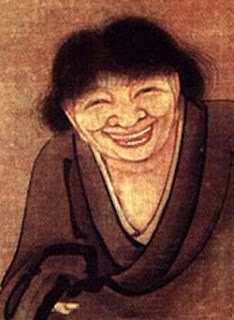 The Songs of Cold Mountain is a collection of several hundred Tang Dynasty poems that are often attributed to a single poet known as Han Shan or the Cold Mountain poet.  There are a number of legends that have developed around the figure of Han Shan -- he was a hermit monk who supposedly inscribed his poems on the rocks and cliffs that surrounded his mountaintop dwelling.   Yet there are some modern scholars who have suggested that these songs are not the work of a single poet but more likely were written by various hermits and monks living in or around the same remote mountaintop over the span of more than 100 years - the Cold Mountain collective, as it were.

Whether you prefer to think of these poems as the work of a single monk or a collective effort, there is a wide range evident in the style and tone of the poems that comprise the collection.  Some are deeply personal - they sound like the first hand observations of a hermit monk as he sits in meditation and watches the clouds gather and disperse in front of his cave. They are serene and utterly remarkable transcriptions of a Chan monk's inner life. (You can read a few translations of Han Shan's more personal and contemplative poems by clicking here.)  Others are more concerned with doctrinal matters and have a far less personal in flavor.  They read as if they were intended or specifically addressed to a public audience of disciples or fellow believers; often they discuss various nuances of the dharma.

This morning I translated one of the poems in the latter category.  What caught my attention was the striking claim in the poem's first two lines which at first struck me as a bit inconsistent, or at least hard to reconcile, with the basic tenets of Buddhism as embodied in the Four Noble Truths.


Intriguing right?  This doesn't sound like something you would expect to hear from a Chan Buddhist monk sitting on a mountaintop.  We encounter suffering everywhere throughout our life passage, from cradle to grave.  So how exactly is it possible for us to easily slough off our troubles?

It may help to understand this poem to think of it as something of a koan - a riddle or attempt to tease out a deeper truth that underlies this apparent contradiction.  Here's my complete translation of the riddle and one possible resolution.