Having gotten in the habit of selecting an image to appear with each poem I write, I started out at a loss for what picture should accompany this new poem.  The immediate prompt for this poem was my birthday last Monday and all the attendant overeating and pondering on mortality it occasioned. So I suppose a cupcake with a candle would have been one option to consider.  Then I thought of posting a photo of Walt Whitman as an old man to convey the idea of a wizened old bard (which at least is the way I picture my self some days) but I was afraid some readers might interpret that as a tad bit presumptuous.  So finally I decided to use this medieval depiction of St. Stephen as a changeling, not to suggest that I've suddenly fallen into a demon's clutches but simply as a metaphor to describe how I'm feeling now - not exactly switched in the crib but nonetheless indelibly different from the person I used to be, not so long ago; in the course of a night or two somehow I'm inexplicably transformed. 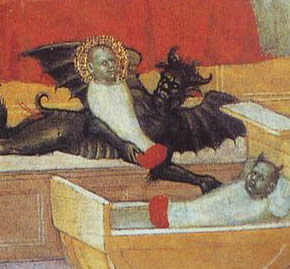 Posted by JoeLampoet at 1:11 PM