Keeping the Pine Barrens True to Its Name 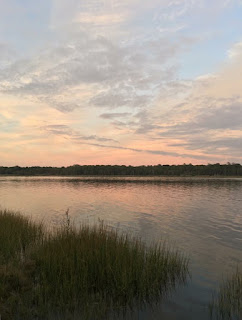 Perhaps it's too soon to celebrate but according to reliable sources, the upshot of this week's meeting of the Southampton Town Board seems to be that the bulldozers for the luxury real estate development that would have been perched atop the Pine Barrens have been stopped dead in their tracks.  How often does that happen in this day and age -- that a big money real estate developer like Discovery Land Company doesn't end up getting its way?  Now the horseshoe crabs, striped bass and fluke that remain in Shinnecock Bay can swim a little easier knowing that they won't have to contend with the runoff from an 18 hole golf course any further fouling the waters of Weesuck Creek.

It has been a four-year long struggle that deeply divided our community. The developers spent lavishly trying to sway public opinion and gained some support particularly from local merchants and builders who stood to benefit most from an uptick in business.  But a large majority of residents in our town remained strongly opposed to the proposed development -- we the people of East Quogue have a well-deserved reputation as refuseniks, content with our tidal estuary as it is, ceaseless in its diurnal change, without need of help from Discovery Land or any other luxury real estate developers.

Many thanks to John Bouvier and Julie Lofstad, our local politicians who have shown real backbone in resisting all the pressure and blandishments that big money brings to this type of fray.  I also have new found respect for our local paper, The Southampton Press, which came out strongly against the proposed development notwithstanding the bait of full page advertisements being liberally thrown their way.  This poem is dedicated to them and all the others who stood up to stop the bulldozers and backhoes in order to keep the Pine Barrens true to its name.

Ode to Saying No (to the proposed PPD)

Posted by JoeLampoet at 9:17 AM